†These authors contributed equally to this study. 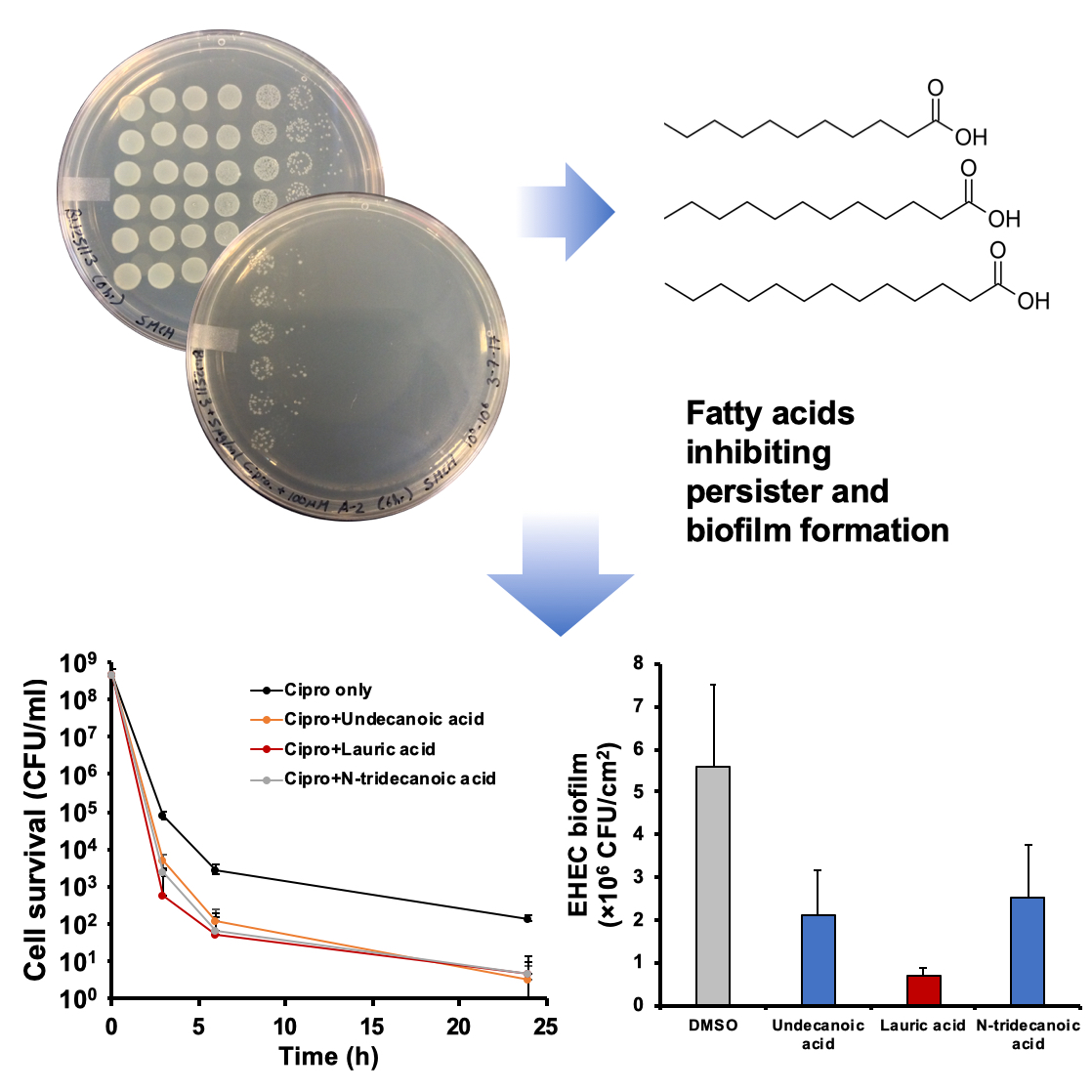 Persister cells are tolerant to conventional antibiotic treatment because they are metabolically dormant or grow slowly without acquiring inherent antibiotic resistance via genetic modifications [30], whereas resistant cells undergo genetic changes that block antibiotic activity [16]. Persister pathogens become active after the level of antibiotics decreases and thus cause chronic recalcitrant infections [19]. Persister cells are also highly tolerant to environmental stresses, such as low pH [25], nutrient starvation [4], hyperosmolarity [37], or heat shock [5]. Because of their high tolerance, persister cells are enriched in biofilms [21], sessile multi-microbial communities that are formed in response to environmental stresses [3] through secreted self-synthesized polymeric matrices [17]. Many bacteria, including pathogens, can form biofilms, but inhibiting biofilms is challenging because of poor antibiotic penetration, biofilm-specific gene regulation, and persister cell formation [35]. Hence, identifying new antimicrobial agents other than antibiotics is critical to decrease persister cell formation.

Fatty acid molecules, composed of a chain of carbon atoms with attached hydrogen atoms, are widely used in therapeutics, food preservation, and agriculture [12]. Some fatty acids inhibit or kill bacteria directly [51], whereas others affect virulence factors or prevent bacterial adhesion [44]. Fatty acids are produced in natural sources, such as plants that are inexpensive and non-toxic [43]. The antimicrobial activities of fatty acids depend on the structure, chain length, and degree of saturation [36]. As a result of these properties, fatty acids are considered as an alternative to conventional antibiotics for the treatment of infectious diseases. Furthermore, fatty acids exhibit antibiofilm properties in relation to antivirulence [28]. However, the roles of fatty acid molecules in altering persister cells have not been extensively studied. -2-decenoic acid produced from was first identified for decreasing bacterial cells in a dormant state by causing them to transition to a metabolically active state via enhancing the expression of metabolic marker transcripts [32]. This compound has also been found to inhibit biofilm formation through enhancing biofilm dispersion [31]. Recently, we reported that ethyl esters of unsaturated fatty acids, including ethyl -2-decenoate, ethyl -2-octenoate, and ethyl -4-decenoate, repress persister formation by regulating the antitoxin HipB [47]. Therefore, fatty acid molecules can be applied to control persister cell formation, thus preventing bacterial infections.

In this study, we screened 65 fatty acids with chain lengths of 10 to 24 carbons, including saturated and unsaturated forms, to determine whether combined antibiotic and fatty acid treatment might decrease persister cell formation. We identified antipersister and/or antibiofilm fatty acid molecules with the potential to be used with antibiotics to treat bacterial infections efficiently.

Persister assays were conducted according to previously reported procedures [24]. Briefly, overnight cultures were diluted 100-fold in 25 ml of fresh LB medium in sterilized 250 ml flasks and incubated at 220 rpm at 37°C until an OD600nm 0.7–0.9 was reached. Late stationary phase cells were harvested after overnight growth (18 h incubation following inoculation). Exponential phase or late stationary phase cells were harvested by centrifugation at 12,000 × for 5 min, washed twice with 0.85% NaCl solution, and adjusted to OD600nm 1.0 with fresh LB. Then, the cells were exposed to each fatty acid at a final concentration of 0.1 or 1 mM in the presence of 5 μg/ml ciprofloxacin, 100 μg/ml ampicillin, or 100 μg/ml kanamycin for 3 h, 6 h, or 24 h at 220 rpm at 37°C. Cells were pelleted, washed twice with 0.85% NaCl solution, and diluted serially (101–104 dilution). Then 10 μl was applied to LB agar plates, which were incubated at 37°C. Persister cells were quantified by CFU counting.

Biofilm formation assays were conducted according to a previously described method [15] with modifications. Briefly, overnight cultures were adjusted to an OD600nm of 0.01 (approximately 5 × 106 CFU/ml) with LB medium, and then 1.5 ml of adjusted culture was added to a polypropylene culture tube (Falcon PN352006, Corning, USA) with or without fatty acids. After incubation at 37°C for 24 h without shaking, the planktonic cultures were discarded, and the culture tubes containing biofilm were rinsed three times with 3 ml of 0.85% NaCl solution. Biofilm cells were carefully collected with a cotton swab [42] and resuspended in 3 ml of 0.85% NaCl solution via vortexing for 30 s. Biofilm cells were diluted serially (101–106 dilution), and 10 μl was applied on LB agar plates, which were incubated at 37°C. Biofilm cells were quantified as colony forming units (CFU) per surface area (cm2).

Overnight cultures were adjusted to OD600nm 0.05 with fresh LB medium, and then 200 μl cell suspensions were added to a 96-well plate. After the addition of different concentrations of fatty acids, cell growth was measured at OD600nm every 20 min at 37°C on a Synergy HTX plate reader in fast shaking mode (Biotek, USA). Each data point was obtained from three replicate wells with two independent cultures.

Statistical analysis was performed with two-tailed Student’s -test between ciprofloxacin only or DMSO control and each fatty acid treatment. The statistical significance is indicated in the figure with * ( < 0.001). All reported data are average ± standard deviation. 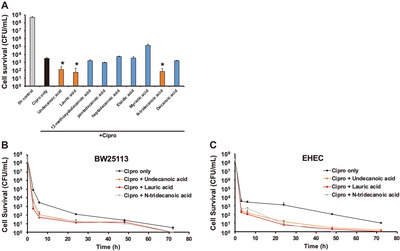 Fig. 1. () Exponentially grown BW25113 cells were exposed to 5 μg/ml of ciprofloxacin (Cipro) and 1 mM of nine fatty acids for 6 h in LB medium. () Exponentially grown BW25113 and () EDL933 (Enterohemorrhagic ) cells were exposed to 5 μg/ml of ciprofloxacin and 1 mM of undecanoic acid, lauric acid, and N-tridecanoic acid for 3, 6, 24, 48, and 72 h in LB medium. Error bars indicate the standard deviation of two independent cultures with three replicates. *Indicates a significant difference relative to ciprofloxacin treatment only, with a -value < 0.001.

Interestingly, the three fatty acids obtained from the persister inhibition screening were all saturated fatty acids of medium-chain length (undecanoic acid, 11 carbon atoms (C11); lauric acid, C12; and N-tridecanoic acid, C13)(Table 1), whereas a collection of various-length (C10 to C24) fatty acids of saturated and unsaturated states were studied (Table S1). -2-decenoic acid, which is a known as antipersister and antibiofilm fatty acid, is medium-chain (C10) and unsaturated [32]. Previously, we investigated nine fatty acids and their derivatives [47] that were unsaturated and structurally similar to -2-decenoic acid and found that medium-chain fatty acid derivatives containing ethyl esters (ethyl -2-decenoate, ethyl -2-octenoate, and ethyl -4-decenoate) inhibit persister formation [47]. Longer-chain fatty acids with greater than C14, such as pentadecanoic acid, heptadecanoic acid, eliadic acid, and myristic acid (Fig. 1A), shorter-chain fatty acid such as decanoic acid (Fig. 1A), and the fatty acid derivatives with C6 to C9 [47] were not able to decrease persister level. Although cellular responses depend on specific fatty acid structural characters, including length, saturation level, and type and location of functional groups [33], nonetheless the chain length of fatty acids may be a critical consideration with respect to antipersister activity, according to previous [32, 47] and current studies. Regulation of bacterial toxin-antitoxin systems [47], increasing protein synthesis [32], or influencing membrane fluidity [28] by fatty acids might cause cells to be more susceptible to antibiotic treatment. However, undecanoic acid, lauric acid, and N-tridecanoic acid in this study were all saturated forms distinct from the previously reported antipersister fatty acid compounds, thus suggesting that they may have a different mechanism of inhibiting bacterial persisters. Further systematic studies will be necessary to understand the specific interactions of medium-chain saturated fatty acids with antibiotics or bacteria during persister formation.

To investigate the effects of these fatty acids on other strains, we examined the time course of persister formation of the EHEC strain, a pathogenic responsible for outbreaks of bloody diarrhea and hemolytic uremic syndrome, and a major source of food poisoning [38]. The persister level of EHEC in the presence of ciprofloxacin 5 μg/ml was 0.0005% (2.5 × 103 CFU/ml) after a 3 h incubation (Fig. 1C), a value 20-fold lower than that of BW25113 (Fig. 1B). This result was consistent with our previous observation of EHEC persister cell formation [47]. When we added 1 mM of undecanoic acid, lauric acid, and N-tridecanoic acid during EHEC persister formation for 3 h, the persister level was 11-, 21-, and 9-fold lower, respectively, than that after ciprofloxacin-only treatment (Fig. 1C). Moreover, extended incubation (up to 72 h) with each fatty acid and ciprofloxacin resulted in nearly complete inactivation of EHEC cells (Fig. 1C). Therefore, undecanoic acid, lauric acid, and N-tridecanoic acid effectively inhibit persister formation of .

Typically, antibiotics repress bacterial growth through different inhibition mechanisms. For example, ciprofloxacin (fluoroquinolone) inhibits DNA replication and repair, ampicillin (β-lactam) blocks cell-wall synthesis, and kanamycin (aminoglycosides) represses protein synthesis [14]. Therefore, we investigated the effects of the medium-chain saturated fatty acids during EHEC persister formation in the presence of different classes of antibiotics in addition to ciprofloxacin. Specifically, we examined EHEC persister formation with 100 μg/ml of ampicillin (Fig. 2A) or kanamycin (Fig. 2B) in the presence of 1 mM of each fatty acid for 6 and 48 h. Similarly to the results with ciprofloxacin and each fatty acid cotreatment (Fig. 1B), the addition of undecanoic acid, lauric acid, and N-tridecanoic acid repressed persister cell formation caused by ampicillin treatment (6-, 14-, and 10-fold lower, respectively, than that after ampicillin-only treatment after 6 h; Fig. 2A). However, we did not observe a noticeable difference during kanamycin treatment with or without fatty acids (Fig. 2B). Cell survival after 48 h of kanamycin exposure (10 CFU/ml) was considered as negligible as it was close to the complete cell killing with the cotreatment (Fig. 2B). These results suggest that the fatty acid molecules that we tested behave differently when persister cells are formed through various bacterial inactivation mechanisms in the presence of different antibiotics.

Fig. 2. EHEC persister formation with 100 μg/ml of () ampicillin (Amp) and () kanamycin (Kan) together with 1 mM of fatty acids for 6 and 48 h in LB. Error bars indicate the standard deviation of two independent cultures with three replicates. *Indicates a significant difference relative to Cipro treatment only, with a -value < 0.001.

We determined that fatty acids did not repress persister formation induced by kanamycin (Fig. 2B). Kanamycin binds the 30S ribosomal subunit and inhibits protein synthesis [6]; as a result, ribosome dimerization induced by the presence of aminoglycosides, including kanamycin, results in the ribosome hibernation and thereby increases bacterial tolerance [34]. Recently, the alarmone guanosine pentaphosphate/tetraphosphate (ppGpp) ribosome dimerization persister model has been proposed to understand how cells enter and exit the persister state [46, 48]. Persister cells are directly formed by inactivating ribosomes via ppGpp with the evidence that persister cells contain a large fraction of 100S ribosomes [46]. Therefore, it is possible that the fatty acids might interact with ribosomes to interrupt the pathway of persistence formation, whereas kanamycin-induced persister cells containing inactivated ribosomes might not be affected by the fatty acids. 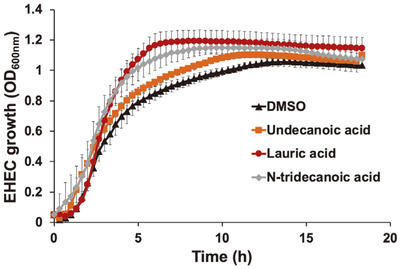 Fig. 3. The growth of EHEC culture was monitored until 18 h in the presence of 1 mM of each fatty acid at 37°C in LB. Cell growth at OD600nm was measured every 20 min. Error bars indicate standard deviations of two independent cultures with three replicates. 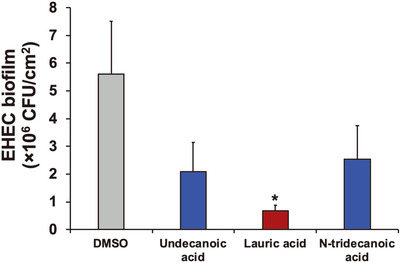 Fig. 4. EHEC biofilms were formed in the presence of 1 mM of undecanoic acid, lauric acid, and N-tridecanoic acid for 24 h at 37°C without shaking. Error bars indicate standard deviations of two independent cultures with three replicates. *Indicates a significant difference relative to the DMSO control, with a -value < 0.001.

Supplementary data for this paper are available on-line only at http://jmb.or.kr.