Molecular and Enzymatic Features of Homoserine Dehydrogenase from Bacillus subtilis

†These authors contributed equally to this work.

Homoserine dehydrogenase (HSD) catalyzes the reversible conversion of L-aspartate-4- semialdehyde to L-homoserine in the aspartate pathway for the biosynthesis of lysine, methionine, threonine, and isoleucine. HSD has attracted great attention for medical and industrial purposes due to its recognized application in the development of pesticides and is being utilized in the large scale production of L-lysine. In this study, HSD from Bacillus subtilis (BsHSD) was overexpressed in Escherichia coli and purified to homogeneity for biochemical characterization. We examined the enzymatic activity of BsHSD for L-homoserine oxidation and found that BsHSD exclusively prefers NADP+ to NAD+ and that its activity was maximal at pH 9.0 and in the presence of 0.4 M NaCl. By kinetic analysis, Km values for L-homoserine and NADP+ were found to be 35.08 ± 2.91 mM and 0.39 ± 0.05 mM, respectively, and the Vmax values were 2.72 ± 0.06 μmol/min-1 mg-1 and 2.79 ± 0.11 μmol/min-1 mg-1, respectively. The apparent molecular mass determined with size-exclusion chromatography indicated that BsHSD forms a tetramer, in contrast to the previously reported dimeric HSDs from other organisms. This novel oligomeric assembly can be attributed to the additional C-terminal ACT domain of BsHSD. Thermal denaturation monitoring by circular dichroism spectroscopy was used to determine its melting temperature, which was 54.8°C. The molecular and biochemical features of BsHSD revealed in this study may lay the foundation for future studies on amino acid metabolism and its application for industrial and medical purposes. 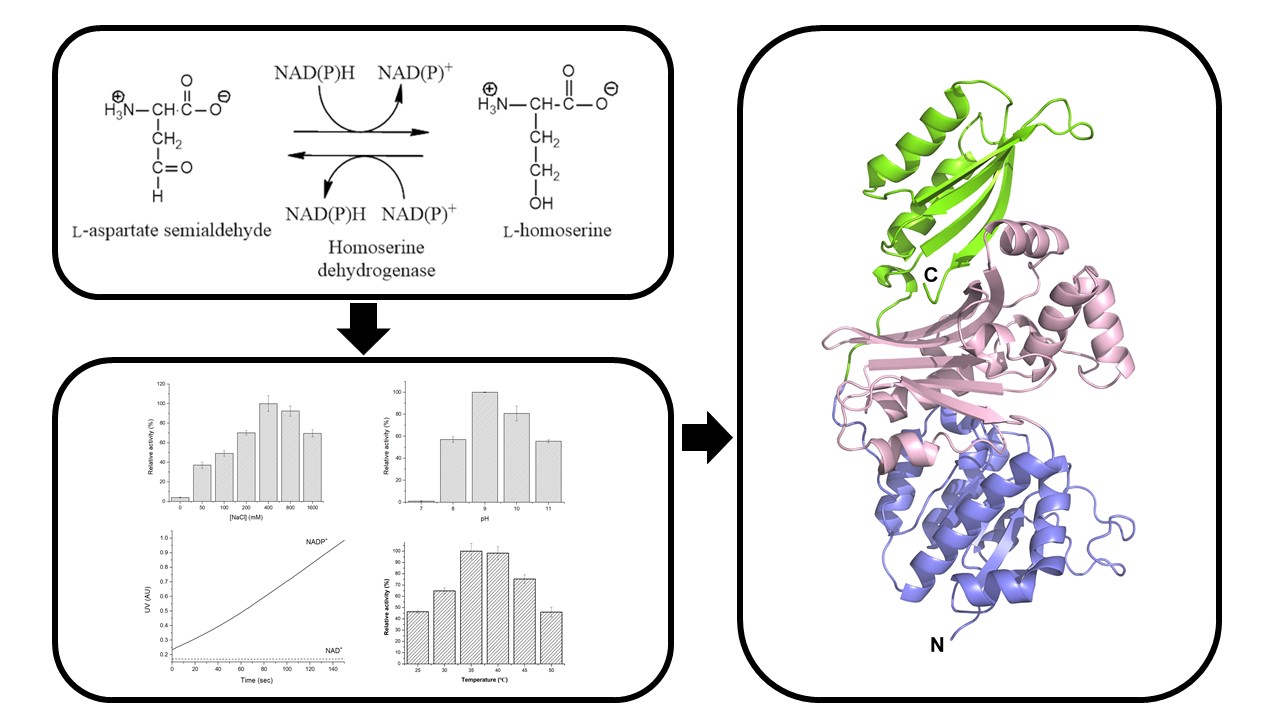