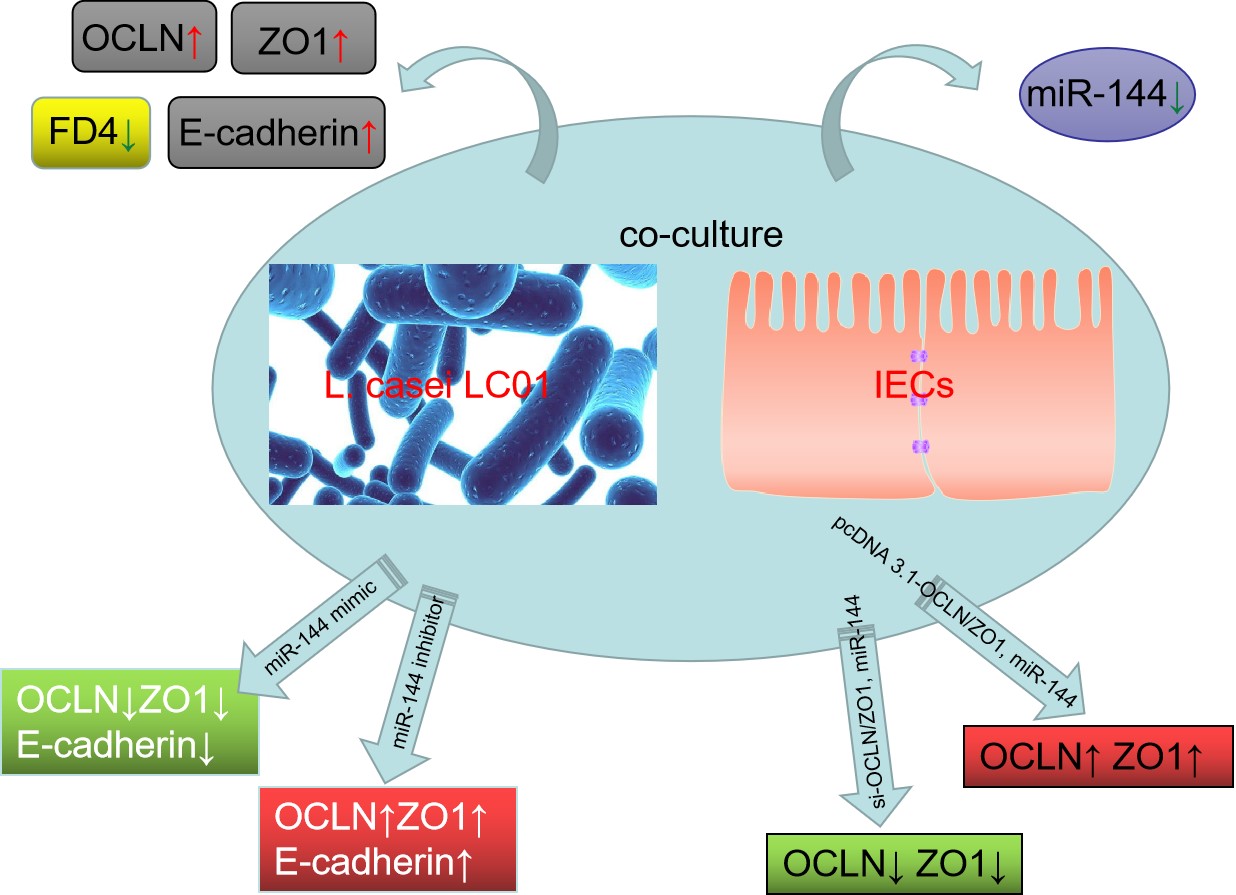 Irritable bowel syndrome [1] is a chronic, functional bowel disorder that is characterized by visceral pain and bloating and altered bowel habits in the absence of anatomical or biochemical abnormalities [2]. Up to 30% of IBS patients have been reported to develop acute gastroenteritis, and most are diagnosed with irritable bowel syndrome with diarrhea (IBS-D), which is a major subtype and correlates with changes in the intestinal microflora after infection [3]. Brain-gut axis dysfunction [4], visceral hypersensitivity [5], gastrointestinal dysmotility [6], and alterations in psychosomatic [7] or psychosocial behavior [8] have been implicated in the pathophysiology of IBS-D, but the exact mechanisms remain largely undefined.

Probiotics are beneficial bacteria that can improve health and maintain the micro-ecological balance of the host intestine. Screening probiotic strains with excellent probiotic characteristics has become a research hotspot. Studies have shown that the probiotic LC01 ( LC01) has good acid and bile salt resistance, and can tolerate a pH around 4.6 [9, 10]. L.casei LC01 has a strong bacteriostatic effect on and can produce bacteriocin or bacteriocin-like polypeptides, usually class II bacteriocins [11]. This active polypeptide can have a significant bacteriostatic effect on gram-positive bacteria [12]. However, there is no report about the role of LC01 in IBS-D.

MicroRNAs (miRNAs) are a type of non-coding small-molecule RNA endogenously expressed in eukaryotic cell organisms and can act on the 3'-untranslated region (3'-UTR) of target gene mRNA [13]. If the miRNAs are completely complementary to the 3'-UTR, it may cause the target gene mRNA to degrade; if not completely complementary, it may inhibit the target gene mRNA translation [14]. Current research reports that miRNAs play an important role in regulating IBS-D intestinal epithelial permeability [15, 16]. We also found in our previous studies that the downregulation of miR-144 can target OCLN and ZO1 to reverse the intestinal epithelial permeability of IBS-D rats [17], but little is known about whether LC01 can regulate the expression of miR-144 in intestinal epithelial cells (IEC).

In this study, we aimed to evaluate whether and how LC01 affects miR-144 expression in IECs and regulates intestinal epithelial permeability, which may provide potential therapeutic strategies for the prevention and treatment of diseases related to intestinal mucosal barrier function.

Human IEC lines (HCoEpiC, C1388) were purchased from the Chinese Academy of Sciences Shanghai Cell Bank and cultured in DMEM containing 100 ml/l fetal bovine serum in a CO2 incubator with saturated humidity at 37°C. Fibroblasts were removed using phase difference digestion and adherence. When 80%-90% of the IECs were adherent to culture plates, the IECs were passaged by trypsin digestion.

LC01 (No. 1.570) was purchased from the China General Microbiological Culture Collection Center and stored at a temperature below 25°C until use. LC01 were cultured and stocked as previously reported [18]. Briefly, LC01 were cultured and incubated in a stationary state at 37°C for 48 h with MRS medium and plated to count effective colony forming units (CFU). LC01 were measured and adjusted to 1 × 109 CFU/ml before use.

Intestinal epithelial permeability as a surrogate marker of layer integrity was measured by using fluorescein isothiocyanate-dextran 4 kDa (FD4; Sigma-Aldrich, USA). The IECs were treated with or without LC01 for 3 days, then FD4 (2 mg/ml) was added to the cultures, and the fluorescein isothiocyanate intensity of the basolateral fluid was measured with a fluorescence reader (FLUOstar Omega; BMG Labtech, Germany). The optical density (OD) value of each well was measured at a wavelength of 450 nm. The FD4 concentration was calculated and was expressed in picomoles (pmol).

The method was as described previously [17]. Briefly, the IECs were treated with or without LC01 for 3 days and then harvested. The contents of OCLN (CUSABIO, CSB-E17291r, China) and ZO1 (CUSABIO, CSB-E17287r) in the culture medium were then determined using the corresponding ELISA kit according to the manufacturer’s instructions. The measurements were repeated in triplicate and averaged. The OD values (450 nm) indicated the relative amount of OCLN and ZO1.

The method was as described previously [17]. Briefly, after proteins were extracted from the IECs, protein concentrations were determined using the BCA Protein Assay Kit (Beyotime, Beijing, China). Equal amounts of protein were loaded onto sodium dodecyl sulphate-polyacrylamide gels (SDS-PAGE) and transferred to polyvinylidene difluoride (PVDF) membranes. The membranes were incubated with primary antibodies (1:300 dilution) overnight at 4°C, incubated with a secondary antibody (1:3,000 dilution) at 37°C for 1 h, and examined using a chemiluminescence detection kit. β-Actin was used as the internal reference. 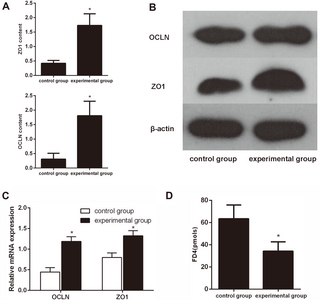 LC01 Suppressed the Expression of miR-144 in IECs

To study the differential expression of miRNAs in IECs in response to LC01, we treated IECs with LC01 for 3 days. IECs treated with or without LC01 were subjected to microarray analysis to identify differentially expressed miRNAs. The results showed that miR-144 was significantly downregulated in IECs during LC01 treatment (Fig. 2A), which is similar to our previous report [14]. To further verify its reliability, 6 miRNAs (including miR-144) were randomly selected for qRT-PCR. Consistent with the previous findings, the expression of miR-144 was significantly downregulated in IECs treated with LC01 compared to the LC01-untreated group (Fig. 2B). Bioinformatics analyses and our previous study[14] found that OCLN and ZO1 mRNAs contain a matching 3’UTR sequence that targets the seed region of miR-144, suggesting that OCLN and ZO1 are potential target genes of miR-144 (Fig. 2C). 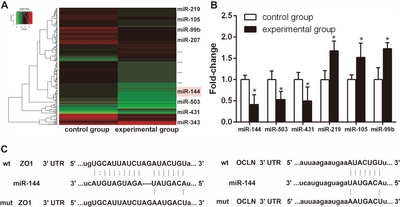 Figure 2. () Heatmap showing that 26 miRNAs were differentially expressed in IECs under LC01 treatment, of which 10 were upregulated and 16 were downregulated. () Six miRNAs (including miR-144) were randomly selected to verify the reliability of the microarray analysis through qRT-PCR.() OCLN and ZO1 share a matching 3′ UTR sequence that targets the seed region of miR-144. * < 0.05 (Tukey’s test).

To evaluate the role of miR-144 in IECs during LC01 treatment, we transfected IECs with RNA oligoribonucleotides under LC01 treatment for 3 days and then tested gene expression by qRT-PCR and western blot. OCLN and ZO1 were significantly decreased in the miR-144 mimic group but were enhanced in the miR-144 inhibitor and miR control group compared with NC group, as shown by qRT-PCR (Fig. 3A). Western blot results also demonstrated that the changes in protein levels were similar to those in mRNA levels (Fig. 3B). These data suggest that LC01 regulates intestinal permeability of IECs via miR-144. 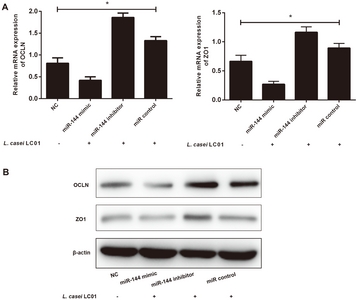 Figure 3. () qRT-PCR results showed that the expression levels of OCLN, ZO1 were significantly decreased in the miR-144 mimic group but were enhanced in the miR-144 inhibitor and miR control group compared with NC group. () The western blot results were consistent with the qRT-PCR results. * < 0.05, difference between all groups (ANOVA & LSD).

First, we transfected IECs with miR-144, si-OCLN or si-ZO1, and verified the transfection efficiency of miR-144, si-OCLN, and si-ZO1 in IECs by qRT-PCR (Fig. 4A). Next, we examined the expression of OCLN and ZO1 by western blot (Fig. 4B) and qRT-PCR (Fig. 4C) during LC01 treatment. The results demonstrated that OCLN and ZO1 were significantly downregulated in the miR-144, si-OCLN, and si-ZO1 groups compared with the NC group and si-control group, of which expression in the miR-144 group was reduced the most. These results suggested that miR-144 promoted intestinal permeability of IECs more strongly than si-OCLN and si-ZO1 during LC01 treatment. 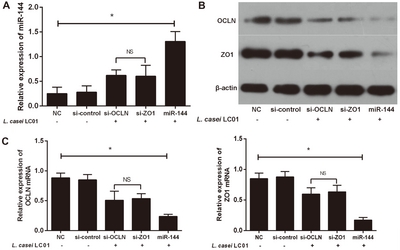 Figure 4. () qRT-PCR demonstrated successful transfection of miR-144, si-OCLN and si-ZO1. (B and C) Western blot and qRT-PCR results both showed that OCLN and ZO1 were significantly decreased in the miR-144, si-OCLN, and si-ZO1 groups compared to the NC and si-control group. In addition, OCLN and ZO1 were the most decreased in the miR-144 group compared with all other groups. * < 0.05, difference between all groups; NS > 0.05, difference between the si-OCLN and si-ZO1 groups (ANOVA & LSD). 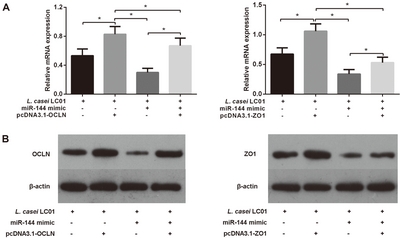 The aim of this study was to further identify the molecular mechanisms underlying the mutual effect of LC01, miR-144 and its target genes on the regulation of the intestinal permeability of IECs. The major findings of the present study were as follows: 1) LC01 suppressed the expression of miR-144 and FD4 and promoted OCLN and ZO1 expression in IECs; 2) LC01 enhanced the barrier function in IECs via downregulation of miR-144 and upregulation of OCLN and ZO1; 3) Under LC01 treatment, OCLN and ZO1 overexpression could partially eliminate the promoting effect of miR-144 on intestinal permeability in IECs. These findings suggested that LC01 regulates intestinal permeability in IECs via miR-144 targeting of OCLN/ZO1, which might be a potential strategy for managing or preventing epithelial barrier dysfunction.

Recent evidence indicates that the communication between the gut microbiome and the host may be partially carried out by miRNAs, which are differentially expressed under specific microflora states [20]. However, the role of miRNAs in the microbial-host communication of intestinal diseases is not yet fully understood. Interestingly, an important finding of the present study is that miR-144 was downregulated in IECs during LC01 treatment, similar to previous reports [21, 22], while in our own previous work we confirmed that miR-144 plays vital roles in regulating intestinal epithelial permeability in IBS-D rats [17], suggesting that LC01 could regulate intestinal permeability of IECs via miR-144.

IECs are key mediators of intestinal homeostasis and are able to establish an immune environment that allows symbiotic bacterial colonization. IECs provide physical and biochemical barriers that sequester host tissues and commensal bacteria to maintain intestinal homeostasis. IECs have a mechanism enabling them to respond to microbial signals, which confers tolerance against continuous exposure to symbiotic bacteria [23]. In this study, IECs were used to investigate intestinal epithelial permeability stimulated by LC01. Both OCLN and ZO1 are potential direct target genes of miR-144 [17], which are tight junction proteins closely related to intestinal epithelial permeability and intestinal epithelial barrier function [24]. ELISA, qRT-PCR and western blot results showed that the expression levels of OCLN and ZO1 were significantly increased in IECs under LC01 treatment when compared to untreated IECs. These results suggest that LC01 could enhance intestinal epithelial barrier function in IECs via downregulation of miR-144 and upregulation of OCLN and ZO1.

In addition, the results of this study have several important clinical implications. First, we conducted miRNA microarray analysis in this study, which provides examples of identifying differentially expressed miRNAs and their target genes after intervention with beneficial bacteria. Second, we provide the basis for further research and characterization of the beneficial bacteria-miRNA-OCLN/ZO1 relationship, which not only helps to better understand the key molecular switches regarding the permeability of the intestinal mucosa but also to characterize the miRNAs related to intestinal epithelial permeability-related diseases. Third, LC01 could be used together with miR-144 as a therapeutic strategy to promote mucosal barrier function and become a new target for the treatment of intestinal epithelial barrier dysfunction-related diseases.