END_OF_DOCUMENT_TOKEN_TO_BE_REPLACED

Vibrio parahaemolyticus is a major gastroenteritis-causing pathogen in many Asian countries. Antimicrobial resistance in V. parahaemolyticus has been recognized as a critical threat to food safety. In this study, we determined the prevalence and incidence of antimicrobial resistance in V. parahaemolyticus in the southern Fujian coast, China. A total of 62 isolates were confirmed in retail aquatic products from June to October of 2018. The serotype O3:K6 strains, the virulence genes tdh and trh, antibiotic susceptibility and molecular typing were investigated. Then plasmid profiling analysis and curing experiment were performed for multidrug-resistant strains. The results showed that the total occurrence of V. parahaemolyticus was 31% out of 200 samples. Five strains (8.1%) out of 62 isolates were identified as the V. parahaemolyticus O3:K6 pandemic clone. A large majority of isolates exhibited higher resistance to penicillin (77.4%), oxacillin (71%), ampicillin (66.1%) and vancomycin (59.7%). Seventy-one percent (44/62) of the isolates exhibited multiple antimicrobial resistance. All 62 isolates were grouped into 7 clusters by randomly amplified polymorphic DNA, and most of the isolates (80.6%) were distributed within cluster A. Plasmids were detected in approximately 75% of the isolates, and seven different profiles were observed. Seventy-six percent (25/33) of the isolates carrying the plasmids were eliminated by 0.006% SDS incubated at 42°C, a sublethal condition. The occurrence of multidrug-resistant strains could be an indication of the excessive use of antibiotics in aquaculture farming. The rational use of antimicrobial agents and the surveillance of antibiotic administration may reduce the acquisition of resistance by microorganisms in aquatic ecosystems. 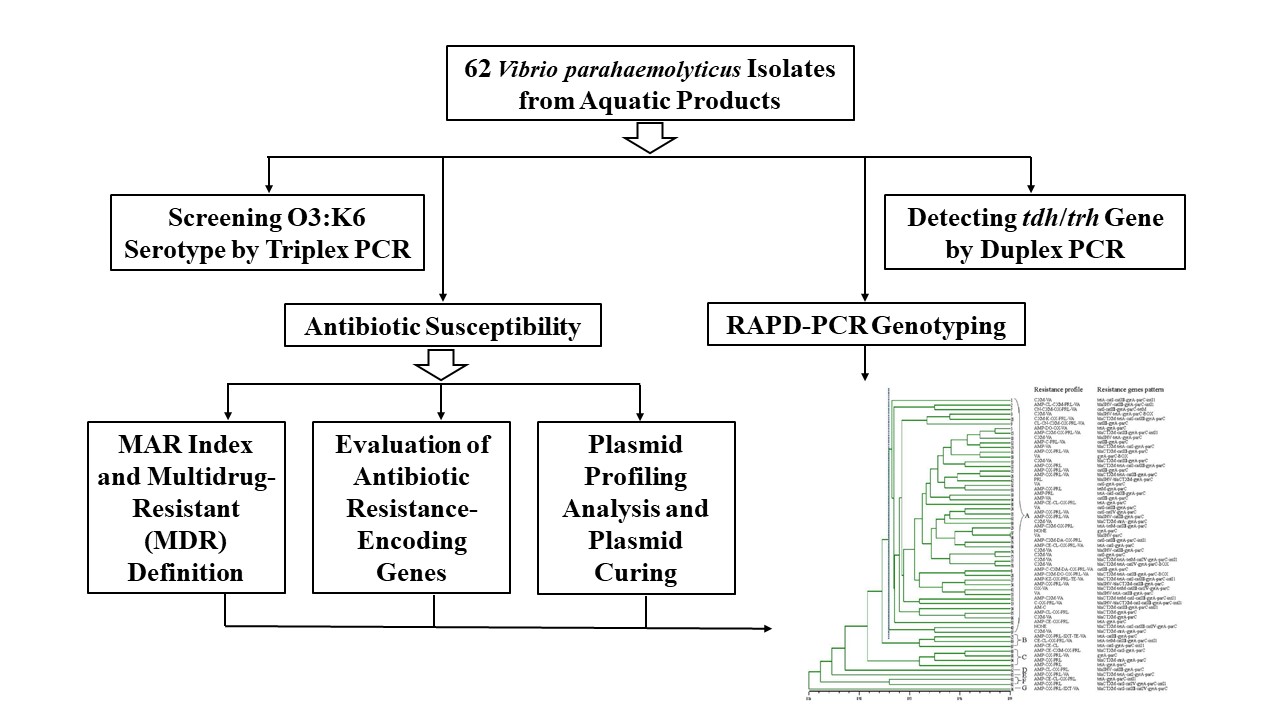