END_OF_DOCUMENT_TOKEN_TO_BE_REPLACED

Microbial rhodopsins are a superfamily of photoactive membrane proteins with the covalently bound retinal cofactor. Isomerization of the retinal chromophore upon absorption of a photon triggers conformational changes of the protein to function as ion pumps or sensors. After the discovery of proteorhodopsin in an uncultivated γ-proteobacterium, light-activated proton pumps have been widely detected among marine bacteria and, together with chlorophyll-based photosynthesis, are considered as an important axis responsible for primary production in the biosphere. Rhodopsins and related proteins show a high level of phylogenetic diversity; we focus on a specific class of bacterial rhodopsins containing the ‘3 omega motif.’ This motif forms a stack of three non-consecutive aromatic amino acids that correlates with the B–C loop orientation and is shared among the phylogenetically close ion pumps such as the NDQ motif-containing sodiumpumping rhodopsin, the NTQ motif-containing chloride-pumping rhodopsin, and some protonpumping rhodopsins including xanthorhodopsin. Here, we reviewed the recent research progress on these ‘omega rhodopsins,’ and speculated on their evolutionary origin of functional diversity. 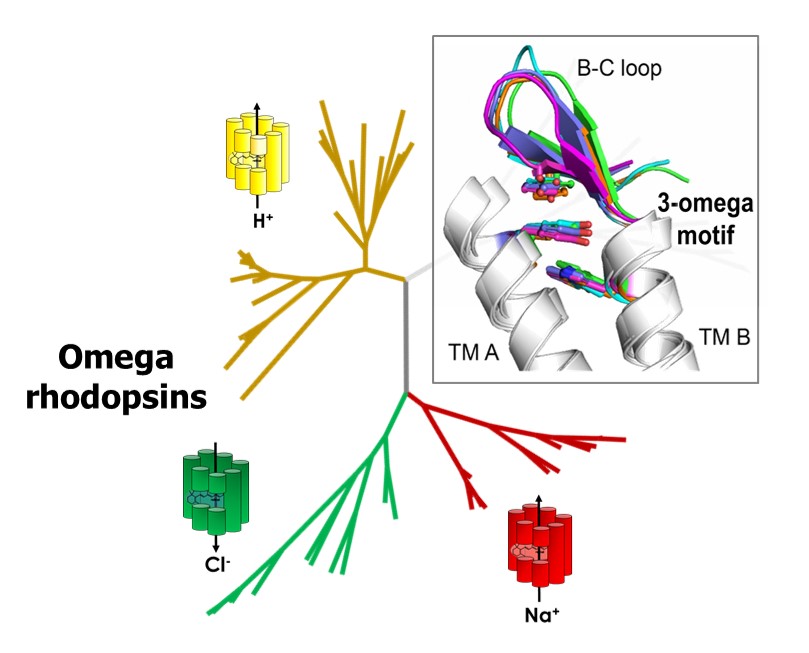